Ozone Applications in Food… Cherish or Perish: towards… How soap annihilates the… The Water Warriors- Real-life… Understanding Water Neutrality: How…

Point of Use Purification… Drinking Water Fountains: All… Is your organization water… Green tomorrow starts with… Germany: New leader on…

Earth’s freshwater ecosystems are critically depleted and being used unsustainably, reported the Millennium Ecosystem Assessment, for today’s 7.7 billion population much less for the 9.7 billion we’ll be by 2050. Water challenges are escalating, and have the potential to impact the natural environment, global health, and economic and industrial growth. Read to know more.

“Water is considered an ‘axis resource’, meaning it’s the resource that underlies all others. So, whether you’re building a computer chip, or growing crops, or generating power, all these things require lots of water. But there’s only a finite amount of water, and now resources are butting up against each other.” – Alex Prud’homme, The Ripple Effect.

Water now is visibly showing through as a root cause of nearly every burning issue hitting the headlines, transforming the world’s geopolitical order and planetary environment. According to the Organization of Economic Cooperation and Development, 47% of the world’s population will face severe water shortages by 2030, which may lead to large-scale migration, ultimately impacting the economic and social structure.

In a landscape where the demand for water is fast outstripping supply, focusing on water neutrality has now become a critical survival strategy. To achieve water neutrality individuals and organisations first need to understand their water footprints.

“The interest in the water footprint is rooted in the recognition that human impacts on freshwater systems can ultimately be linked to human consumption and that issues like water shortages and pollution can be better understood and addressed by considering production and supply chains as a whole,” says Professor Arjen Y. Hoekstra, creator of the water footprint concept.

The water footprint is an indicator of the use of freshwater that can be both direct and indirect water use as a consumer or producer. Water use is measured in terms of water volume consumed, and/or polluted per unit of time.

The indirect water footprint is the water consumption and pollution that is “behind” or within the production cycle of goods and services, or the inputs used by the producer, taking into account the volumes of water consumed and polluted in the different steps of the supply chain.

As the indirect water consumption is invisible, we often use far more water than we realise.

The water footprint helps us understand the reason behind the over-consumption of water and the impact it has on the affected region. If the place is already water-scarce, then the consequences can be significant.

The water footprint has three components: green, blue and grey. Together, these components provide a comprehensive picture of water use by delineating the sources of water consumed, either as rainfall/soil moisture or surface/groundwater, and the volume of freshwater required for assimilation of pollutants.

The green water footprint is water from precipitation that is stored in the root zone of the soil and evaporated, transpired or incorporated by plants. It is particularly relevant for agricultural, horticultural and forestry products.

The blue water footprint is water that has been sourced from surface or groundwater resources and is either evaporated, incorporated into a product or taken from one body of water and returned to another, or returned at a different time. Irrigated agriculture, industry and domestic water use can each have a blue water footprint.

The grey water footprint is the amount of freshwater required to assimilate pollutants to meet specific water quality standards. The grey water footprint considers point-source pollution discharged to a freshwater resource directly through a pipe or indirectly through runoff or leaching from the soil, impervious surfaces, or other diffuse sources.

Some facts and figures

The most common use of the water footprint is to calculate the quantity of water used to grow a unit (kilogram) of food or produce a specified weight of a product. Calculations by the Water Footprint Network show, it takes 822 litres of water to grow a kilo of apples. For a kilo of beef, it is 15,415 litres, and 5,521 litres for a kilo of mutton. Rice needs 2,497 litres while potatoes need 287 litres a kilo. However, these are global averages. 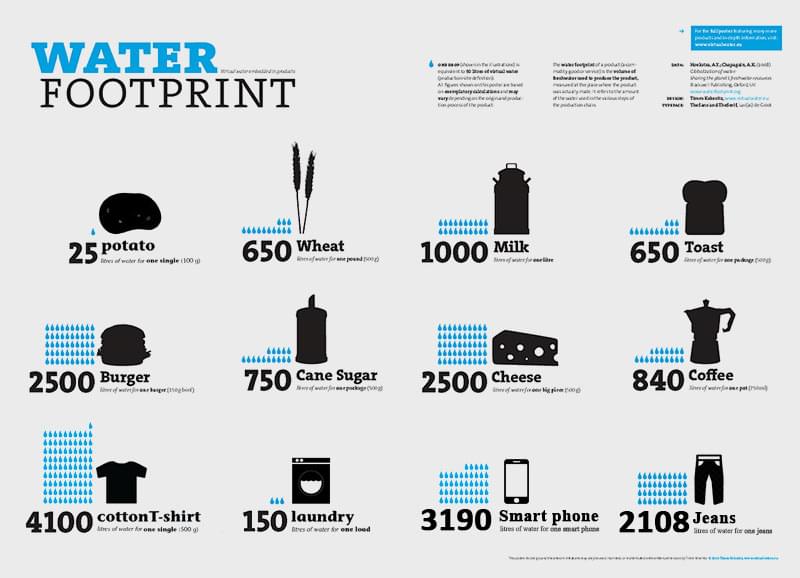 Today, water scarcity has disrupted the livelihoods of almost 4 billion people across the globe. As each day passes, more and more pollutants from agriculture, industry and domestic sources enter the water bodies; in due course, declining the freshwater biodiversity precariously: Some 20% of fish species have gone extinct or are threatened. Due to this and many other reasons, the World Economic Forum’s Global Risks Report has repeatedly ranked water crises as one of the global risks with the highest impact.

There is no longer a business case for not using water sustainably. However, some leading companies are showing the way forward. Top Nordic textile brands such as H&M and Ikea are working with Sweden Textile Water Initiative to reduce their supply-chain water footprints.

Considering the total water footprint for the top-10 clothing companies amounting to at least 2,800 billion litres of water annually  or over 1 million Olympic-size swimming pools, efforts to reduce the direct footprint itself can actually reap tremendous benefits.

While many of us have the luxury of getting 24*7 access to clean water, whenever and wherever we want, it is somewhere ripping our sense of value for this incredibly invaluable resource. With our sewage waste treated properly, store shelves fully stocked at all times, we are enjoying these luxuries at the cost of others. We can no longer ignore the impact of our water footprint simply because the crises are happening in some other part of the world. We must become global citizens, prepared to care for water, wherever it is being used, to ensure that it is treated with the respect it deserves.

“When the well is dry, we know the worth of water.”