“We should take the first important step to finally bid goodbye to plastic,” our PM stated on Independence Day. While India was gearing up to endorse a nationwide ban on single-use plastic bags, cups, straws and bottles on 2nd October, our dear railway minister did ‘Apne Mann Ki Baat’ and tweeted about setting up 6 new Rail Neer plants in the nearby future. Read to know more!

On 15th August’19, Prime Minister, Narendra Modi had delivered his Independence Day speech at Red Fort, pitching for freedom for India from single-use plastic. His appeal to the people and government agencies to "take the big step" towards eliminating the same incited the government to look for sustainable alternatives to plastic water bottles on a priority basis.

“We have to move beyond conservation and think about compassion”- PM, Mann Ki Baat, Independence Day.

While India was gearing up to endorse a nationwide ban on single-use plastic bags, cups, straws and bottles on 2nd October to root them out of cities and villages that rank among the world’s most polluted cities, our dear railway minister did ‘Apne Mann Ki Baat’.

On one hand, the Union Minister for Consumer Affairs, Food and Public Distribution, Ram Vilas Paswan issued directions to his departments to come up with alternatives to plastic water bottles. On the other hand, within a few days, Piyush Goyal, Minister of Railways and Commerce & Industry, tweeted about establishing 6 new Rail Neer plants, endowing “Amrit” all across the country. 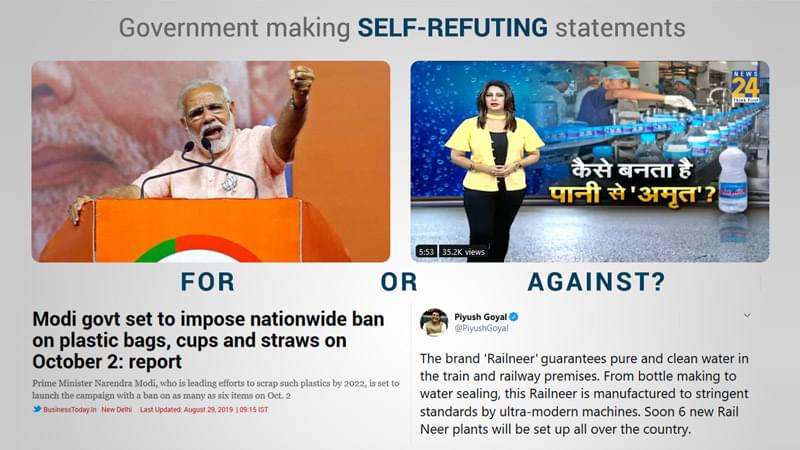 Quite an incongruous decision by our railway minister. Is there an explanation for this lack of coordination between the ministers of the same regime?

Rail Neer packaged water is a lucrative venture of the Indian Railway Catering and Tourism Corporation (IRCTC) under the Ministry of Railways. While the government is urging organizations and agencies to exterminate single-use plastic products and curb down the plastic use in general, their own actions are not really synchronized with their statements. While the Prime Minister proposed, our dear Railway Minister disposed!

Let us hark back to basics for Mr. Goel, in order to gain a better perspective to fathom out why this muddleheaded idea of opening 6 new bottle plants might turn into a series of bad decision making!

Well sir, firstly, plastic is the ultimate ECO-VILLAIN to say the least. The more we use plastic, the more we depend on it. The more we choke in it. A recent study by the US Geological Survey, titled ‘It is Raining Plastic’, after collecting rainwater samples, revealed that more than 90% of them contained multicolored plastic fibers, as well as tiny beads and shards. Microplastics, defined as less than 5 millimeters long, have been found in marine ecosystems, waste and fresh water, foods, in the stomachs of people and animals, and now in the air too. Can the situation get any worse!?

Not long ago, a study led by a US based journalism organization found that almost 93% of the bottled water samples from world’s most famous brands contained microplastics that have seeped into the water during the packaging process! The plastic debris including polypropylene, bisphenol A, nylon, and polyethylene terephthalate (PET) have posited carcinogenic and other potential health risks!

This has made one thing stark clear; we are simply drowning in the plastic we’ve been consuming for the past so many decades and there is no going back now. Plastic takes around 400 years to biodegrade. When it is broken down, this simply means one large piece of plastic is reduced into a bunch of smaller pieces.

The eco-villain has spared no one. Be it the environment, its people, or the animals. Plastic debris have been found everywhere, wherever people have looked, from sediments on the deepest seafloor to the ice floating in the Arctic. Ocean plastic is estimated to kill millions of marine animals every year, with nearly 700 species, including the endangered ones known to have been affected by it. 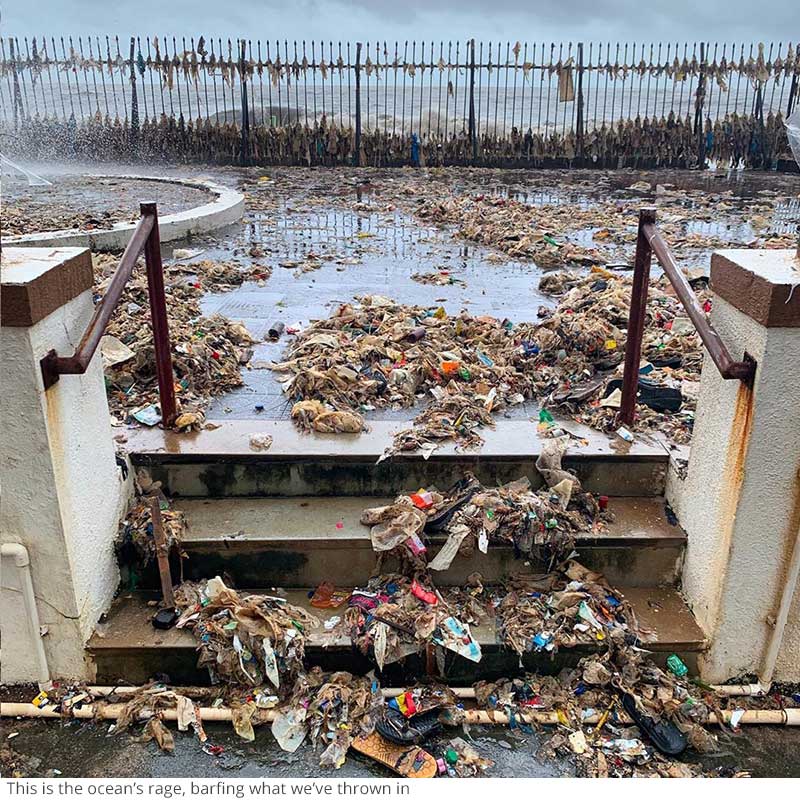 “Can we free India from single-use plastic?” Our solicitous prime minister had asked in his Independence Day speech.

Taking the example of 6 Rail Neer bottle plants, that the government is planning to establish, might make things clearer. If these bottling plants are set up, assuming the capacity of each to be 20,000 liters/hour, they would produce 20,000 plastic bottles per plant within an hour. If one plant works for 12 hours, each would be producing around 2,40,000 of bottles. Imagine the number of plastic bottles produced in 365 days! 8,76,00,000!! Multiplying this into 6, as the government will set up 6 plants all across the country, the number of plastic bottles produced within a year, would be 52,56,00,000!!!

Like much of the world, India too is struggling to dispose its multiplying quantities of plastic waste given how much ubiquitous it has become. Out of the above calculated 52,56,00,000 plastic bottled produced, probably 10,00,00,000 would be chucked into the marine bodies. The impact of this on marine life, is unconceivable. If the government backpedals by launching six more bottle plants, it would be buoying up this growing environmental catastrophe.

The nation wants to know, how you’ll be managing these mammoth amounts of plastic water bottles alongside the existing mountains of plastic trash Mr. Goyal!? Will your reverse vending machine be able to compress 52,56,00,000 number of plastic bottles, along with other 1,00,00,000 more plastic drinking containers!?

Well don’t slacken your seat belts just now. There’s more to come. Studies have shown that it takes around 4 liters of water to package one plastic bottle of water, which means, for packaging 52,56,00,000 plastic bottles, it would gollop around 2,10,24,00,000 LITERS OF WATER!!

Furthermore, reports have said that 17 million barrels of oil is consumed every year to manufacture bottled water and this amount of energy incinerated in manufacturing can power up to 190,000 homes!! Well, multiplying that into six, 11,40,000 homes! As if this isn’t enough, water bottling processes release around 2.5 million tons of carbon dioxide in the atmosphere, annually!

Mr. Piyush Goyal, being an influential figure in the political arena, you really need to think this through! Our considerate prime minister might not be in favor of your inconsiderate, eco-ignorant decision!

The upcoming blanket ban of single-use plastic products on 2nd October, wouldn’t work unless steps are taken to stop their manufacturing altogether. Plastic waste and its management are comprehensive processes and should not be tackled in isolated efforts. Rather, the government should advocate cohesive approaches, conscientious strategies and domestic paraphernalia in order to tackle the brewing plastic menace.

To facilitate a greater change, the need to come up with sustainable solutions and methodologies has become even more imperative. A paradigm shift from eco-destructive, not-so-fantastic plastic, to eco-conscious sustainable hydration solutions like drinking water stations, bottle filling stations, drinking water fountains is a much-needed move!

In 2008, the Airports Authority of India installed drinking water stations at Indira Gandhi International Airport, one of the busiest airports in India, in an attempt to become environment friendly. Currently also, the Airport authority has been working towards eradicating the single-use plastic by the end of this year.  Furthermore, the Airports Authority of India on 3rd September, declared 20 more airports as ‘single-use’ plastic free taking the total number to 55!

If the airports can do it, so can the railway stations! In this hour of ecological endangerment, the government must espouse sustainable practices and methodologies in order to tackle the vehemence of plastic extremities in our country. #SAYNOTOPLASTICBOTTLES