Ozone Applications in Food… Cherish or Perish: towards… How soap annihilates the… The Water Warriors- Real-life… Understanding Water Neutrality: How…

Point of Use Purification… Drinking Water Fountains: All… Is your organization water… Green tomorrow starts with… Germany: New leader on…

This week, a full-page advertisement by Pet Packaging Association for Clean Environment [PACE] in all major dallies, intimidated not only environmentalist but environmentally passive citizens as well and the social media was alive the entire week discussing and debating the myth of PET & OTHER PLASTICS. Read to know what the fuss is all about!

This week, a full page advertisement by Pet Packaging Association for Clean Environment [PACE] in all major dallies, intimidated not only environmentalist but environmentally passive citizens as well and the social media was alive the entire week discussing and debating the myth of PET & OTHER PLASTICS. 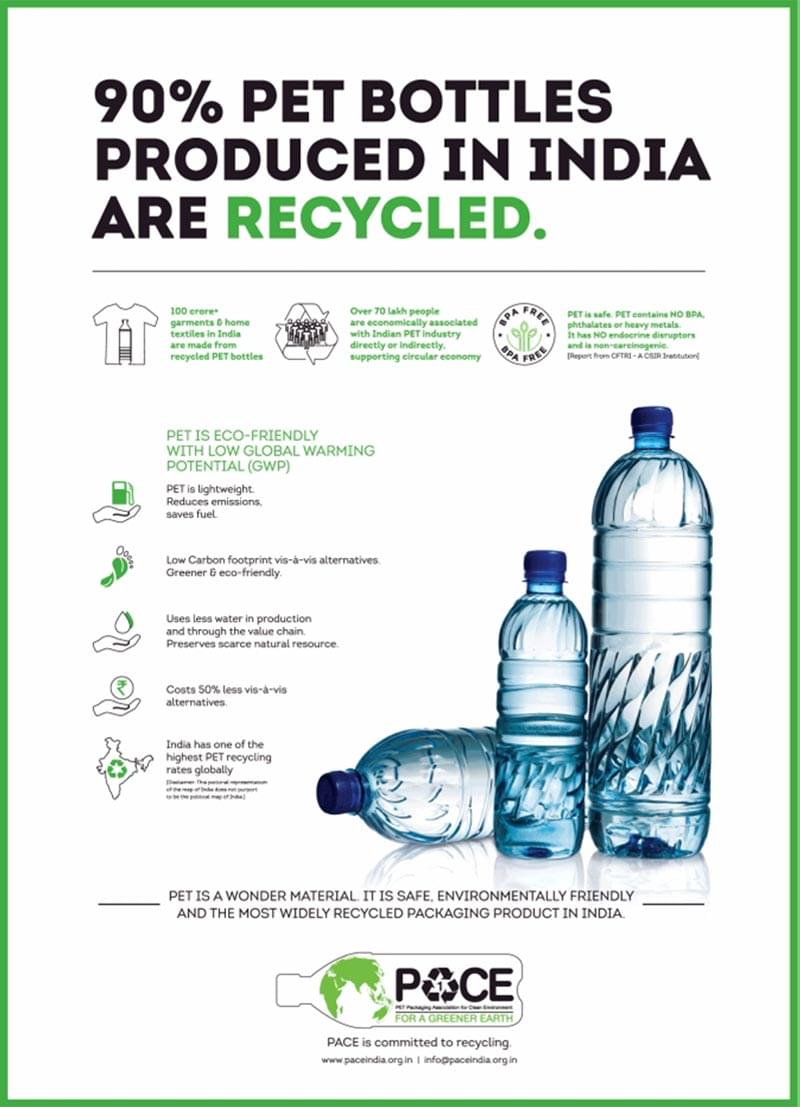 FACTS ARE STRONGER THAN FICTION 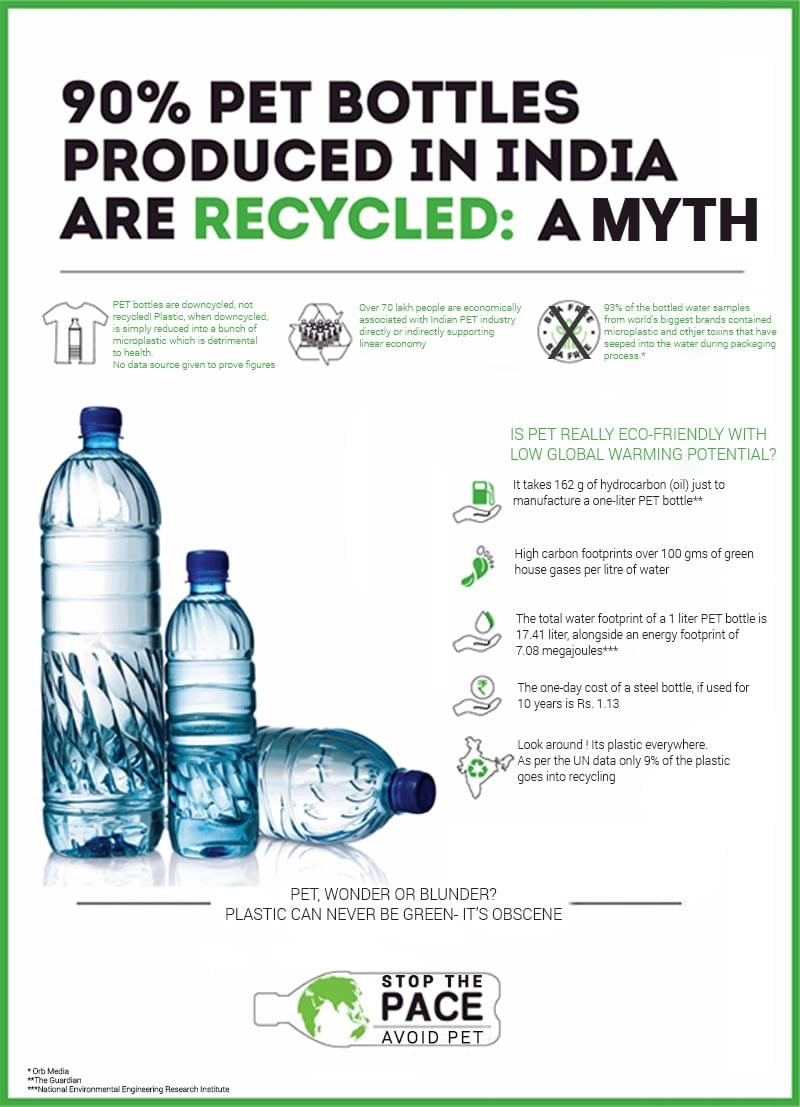 While plastic has many uses, we have become addicted to single-use or disposable plastic — with severe environmental consequences. Around the world, one million plastic drinking bottles are purchased every minute, while up to 5 trillion single-use plastic bags are used worldwide every year. In total, half of all plastic produced is designed to be used only once — and then thrown away. Plastic waste is now so ubiquitous in the natural environment that scientists have even suggested it could serve as a geological indicator of the Anthropocene era.

Global Research estimate that more than 8.3 billion tonnes of plastic has been produced since the early 1950s. About 60% of that plastic has ended up in either a landfill or the natural environment.

Trends are worrying. Since the 1950s, the rate of plastic production has grown faster than that of any other material. We’ve also seen a shift away from the production of durable plastic, and towards plastics that are meant to be thrown away after a single use. More than 99% of plastics are produced from chemicals derived from oil, natural gas and coal — all of which are dirty, non-renewable resources. If current trends continue, by 2050 the plastic industry could account for 20% of the world’s total oil consumption.

These single-use plastic products are everywhere. For many of us, they’ve become integral to our daily lives.

We need to slow the flow of plastic at its source, but we also need to improve the way we manage our plastic waste. Because right now, a lot of it ends up in the environment.

Only 9% of all plastic waste ever produced has been recycled. About 12% has been incinerated, while the rest — 79% — has accumulated in landfills, dumps or the natural environment. Cigarette butts — whose filters contain tiny plastic fibres — were the most common type of plastic waste found in the environment in a recent global survey. Drink bottles, bottle caps, food wrappers, grocery bags, drink lids, straws and stirrers were the next most common items. Many of us use these products every day, without even thinking about where they might end up

And the world is waking up to the problem, and we need to act, before it’s too late

There are a number of things we can do to begin with — from running community awareness programs, avoiding single use plastic products to consciously opting for recycling initiatives and boycotting certain products like bottled water outright. In the last decade, dozens of national and local governments around the world have adopted policies to reduce the use of disposable plastic. And the number continues to grow.

Africa stands out as the continent where the most countries have adopted a total ban on the production and use of plastic bags. Of the 25 African countries that have banned the bags, more than half have done so in the last four years alone.

We’ve seen a lot of positive action, but the truth is that we all need to do a Plastic Detox.

Prime Minister and his council off late are calling on people everywhere to take concrete steps to #BeatPlasticPollution in their own lives. But you don’t have to wait until 2nd October to act. There are so many things that you can do right away – from asking the restaurants you frequently visit, stop using plastic straws, to asking your vegetable vendor not to use plastic bags and avoiding products in plastic pouches to pressuring your RWA and local authorities to improve how they manage your community /city waste.

And most import #say no to bottled water – carry your own steel bottle and push your organisation to avoid bottled water and adopt #Point of use purification devices. 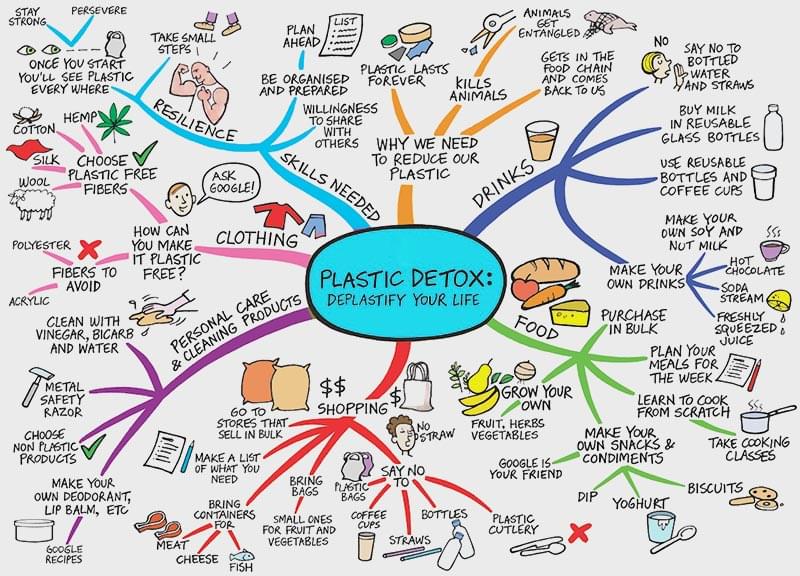 “You wouldn't think you could destroy the earth, would you? But we'll do it one day. That's how negligent we are.”
Ian Rankin, Blood Hunt

Our blue is green- Make yours too!